Ales for Trails is coming up this Friday at Zoo Montana, and we are so excited to welcome you to the event that gives so much back to our community!

Ales for Trails will feature live music by the very popular band, Arterial Drive, preceded by crues artist Daniel Kosel and his band.

Along with a selection of more than 50 local and regional microbrews, partygoers will enjoy a variety of wines and nonalcoholic drinks, a selection of foods for purchase from Big Guy Barbecue, Kanthaly’s, Oktoberfest and Andy’s Famous Wood Fired Pizza and Silent Disco provided by Tel net and Nate Benfit.

Eventgoers are encouraged to walk or ride bicycles to Ales for Trails to celebrate the event that gives back to the multiuse trail system. Bicyclists and sponsors will be welcomed to Ales for Trails with a red carpet and special bike parking will be provided inside the gates at ZooMontana.

For a chance to win this bike AND become a member/make a membership donation, you can buy your raffle ticket at the event or online when you purchase your Ales for Trails tickets! 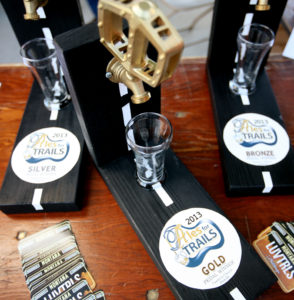 To add a competitive edge, breweries at Ales for Trails are awarded trophies for the three most popular beers. Gold, Silver and Bronze Pedal awards have taken the shape of bicycle pedals, beer taps and even unusual lamps.  Golden Pedal sponsor Ernie Lee from Rimrock Subaru will be on stage with Gold Pedal sponsor Michael Sanderson from Sanderson Stewart and title sponsor Brad Fuller from Fuller Family Medicine, to present brewers with awards for the best three beers.

Water coolers and nonalcoholic drinks will be conveniently located around the event.

Ales for Trails is produced by our two staff and wonderful volunteers at Billings TrailNet, and the proceeds from the event enable us to raise money and advocate for multiuse trails in Billings. Since the year 2001, Ales for Trails has helped to raise more than $800,000 for the trail system, and Billings TrailNet has donated more than $500,000 to 18 different trails in Billings.

Billings TrailNet is continuing a campaign to raise funds for the Skyline Trail: a major connector trail between Swords Rimrock Park and Zimmerman Park, and will showcase the trail at Ales for Trails. In addition, guests will have a chance to learn about and be involved in projects and programs Billings TrailNet is undertaking to advance the Billings trail system.

Ales for Trails tickets are on sale at sponsor locations, including Yellowstone Fitness, Thirsty Street Brewing, The Base Camp, The Spoke Shop and The Bike Shop. Tickets are $35 at the retailers listed above (until they close) Thursday, Sept. 5. Online ticket sales closes at noon Sept. 5, and you can buy day-of the event tickets at retailers and at the gate for $40.

No one under the age of 21 will be allowed through the gate, and Billings TrailNet urges our guests to drink responsibly at the event.

Ales for Trails are only available online or at the ticket outlets mentioned above.
We caution you not to buy tickets from anyone on Facebook or Craigslist.